On January 20, 2007, I completed a master's thesis at Dartmouth. The topic of the thesis is "Transgressive Interactive Art", a term I use to describe artwork which uses aggressive or coercive tactics to incite the audience to participate in the work in ways they ordinarily would be unwilling to. The thesis consists of four pieces, described below, as well as a written analysis of the pieces and other contextually relevant works. 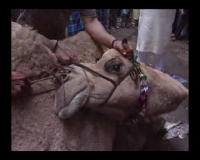 Inhibit is a performance piece which asks the audience to give up on its inhibitions, and speak publicly.

Inhibit was performed at Dartmouth College as part of the New Music Festival in April of 2006.

Video of the performance (30MB mov)

At the beginning of the piece, a microphone on a stand is placed at the front of each aisle of the auditorium. The screen shows only a large, stylized face staring at the audience, the colors shifting slightly, with the occasional blink. When the microphones are ready, the face speaks, with an other- worldly, gravelly voice, not quite human, but not very obviously machinic or robotic. Somewhat meancing. It says assertively, "It's my turn to speak. I have something to say."

The face fades out, and a video sequence begins to play, with a sound- track consisting of soothing, soft sounds, with a bell-like character reminis- cent of an electronic piano. The video consists of jittery images of cherry blossoms, passing clouds and the sun against a blue sky. This image disintegrates slightly into pixelated grays, and then reforms once again before switching to a new scene. The new scene is blurry images of a lake, with trees behind, with hues more intense than reality. The sound reflects this transition with a new bassiness, and a plodding, methodical rhythm. The camera view moves slowly to shore, and enters the forest. Trees pass by more quickly, as a sound like clattering wood begins to rise from the droneish ostinato. Dead sticks and fallen trees join the live ones, we are passing over leaves, and through a dense forest of fantastic color. A few people enter the frame, walking in front of the camera - with familiar clothes and skull caps, looking back and smiling. Their images fade out as a more discordant din joins us.

There is a slam of a broken piano, with a flashed image of blood. A mo- ment passes, then a distorted voice screams, "ATTACK!" A fast, pounding beat and noise come in, as flashing and flickering images hit us. A camel is being slaughtered, blood is pouring all over the screen. This visceral image hits us enough that we scarcely notice the alternating frames of a woman, and a man -- is that a porno? Faces contorted in pleasure, superimposed over the gaping red wound of the camel, slaughtered by people that must be arabs, or at least mid-eastern or north African, definitely "other".

The video loops as the sounds increase, thundering crashing sounds joining the hard driving beats and noise and screaming, and finally with a last crash, red color swells up and fills the screen, a bright red, which pulses along with a machinic swell and fall of basey sounds. This slowly fades, and we are greeted again by the face. The face speaks out, asserting "It's your turn to speak. Don't you have something to say?" It then stares at the audience, waiting.

At this point, the performer of the piece takes the controls from a hid- den position in the pro jection booth, controlling which images play on the video, and sampling sounds that the audience members make. The per- former monitors the sounds coming in the microphones, and can choose particular sounds to capture as loops which play through the speakers.

When this piece was performed at Dartmouth college, the audience re- mained silent for a time, unsure what to do - an uncomfortable silence, as the face continued to stare at them, and they at the face. After a minute, the screen switched again, briefly, to the discordant noise and bloody im- ages from before, before returning to the face which quickly prompted them again: "Don't you have something to say?" Finally, the more brave in the audience began to cautiously test the waters. A male in the back let out a whoop. A couple of people clap their hands. The sound of the whoop began to loop, playing back through the speakers. A middle aged person toward the front yelled out, "Shock Value!" Her words began looping through the speakers as well. More people made sounds, a few more yells, but very lit- tle speech content. The video switched occasionally to the discordant noise and violence, occasionally to the soothing sounds and cherry blossoms, but always returned to the stare. After a couple of minutes, the looped samples had built up to a zoo-like din of noises is coming from the speakers, includ- ing the repeating sounds of all the whooping, hollering, yelling and cat calls from the audience. The image faded to black and the sound went silent, ending the piece. 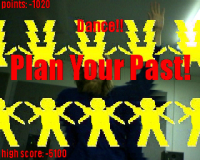 Still is an installation piece which coerces audience members into remaining still, even as the messages flashing on the screen indicate that they should move.

I have constructed a simple web-based game around being still as well. It may be played here.

Still is a piece intended to be used as a gallery installation, for projected video, video camera, computer and audience. It is installed in a room with an open doorway, arranged such that a person walking past the doorway is not immediately visible to the camera, but upon walking in the room, the camera will "see" the visitor.

Upon entering the room, visitors are presented with an image of them- selves, with dancing paper-cutout figures and flashing text superimposed on top, in a style reminiscent of an early arcade video game. The words on the screen flash commands at the viewer - "Dance!", "Raise your right arm!", "Other right, silly!", "Plan your future!", "Game Over!", "Plan your past!" In the top left, a point counter increases (decreases? there is a negative sign in front), counting attempts by the viewer to follow the instructions and move around, or to move at all. In the bottom left is a "high score" indica- tor. And the sound. Rather loudly, very annoying "circus music" is playing continuously. The whole scene is disorienting, and generally annoying and unpleasant.

The visitors might begin to notice after playing with the machine for a bit that it does not matter which movements they make, the point ticker keeps counting down with each movement. Also, they might notice that if they stay still for a few seconds, the screen changes - it cuts to black, the circus music stops, and some pictures of nature come up. More soothing, droning music comes on. But as soon as a visitor moves again, back come the dancing stick figures, flashing words, superimposed over the visitor's image. This might incite him or her to remain still for longer, so as to be greeted by the nature scenes again. At any point, if someone moves, the system returns the circus music, and the visitors must again remain still in order to return to the beginning of the video sequence again. Indeed, if another person walks into the room, he or she will trigger the dancing dolls and circus music. To stay in the more soothing imagery and sound, it is necessary not only to stay still, but to get others in the room to stay still as well.

The more soothing nature sequence is not just a steady state, it has a progression: the amplitude and complexity of the background increases, percussive sounds start joining the drones, and the imagery changes - the screen shows pictures of a pier, the ocean, wind mills, a red desert with a road, and more. A very patient observer will see the sequence end, and will notice barely audible, rhythmically chanted words coming forward in the mix. After this, the screen goes black, and the soundtrack fades out.

Eventually, the viewer will move, either from fatigue, or to leave. At this point the circus music returns. 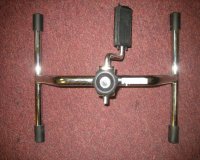 Community is an installation piece which pits audience members against each other. Turning each of two cranks causes uncomfortable sounds to arise in the opposite rooms.

Two cranks sit in two rooms, adjacent to each other. There is a door con- necting the two rooms. The cranks are at hand level, and can be turned. Speakers are placed in the corners of each room. If a participant turns one of the cranks, sound starts to come out of the speakers in the opposite room - loud, uncomfortable sound. It is the sound of speech, but it is layered so thickly and is variable enough in speed that it is difficult to make out who the speaker is, or what is being said. The harder one turns, the louder the sound is in the opposite room. The same is true for the opposite room - turning its crank results in oppressively loud sound in the first room.

If both cranks are turned simultaneously, an interaction occurs: turning a crank reduces the efficacy of the neighboring cranks amplifications. Thus, the crank that is turned the fastest will cause noise in the opposite room, but that noise will be proportional in volume to the speed of the opposite room's cranking. Furthermore, the efficacy of one's cranking decreases gradually over time - if a participant turns the crank at a steady speed for a period of time, that effective amplification of the opposite room and attenuation of his or her own room will decrease, requiring the participant to crank harder to achieve the same levels. If both cranks are turned simultaneously at the same rate, the harsh loud sounds drop away from both rooms, and a more pleasant, rhythmic sound comes out of both speakers.

Participants are not told of the mechanics or behavior of the system in advance, they are left to figure it out. 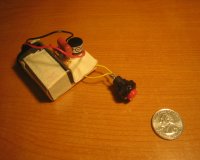 SDD is a guerilla device which can be turned on but never turned off. It emits a horrible noise when on.

SDD is a simple electronic device: it consists of a capacitor, a transistor, a piezzo buzzer, a battery, and a momentary switch. The switch is a fairly large red button, with a tiny label pasted on it with the instructions, "Do Not Press This Button". If the button is pressed, the device immediately begins to emit a high pitched, uncomfortably loud sound. Once pressed, the sound plays until the circuit is broken, or the battery is removed - and the battery is soldered in.

The piece is intended to be deployed in one of three ways: First, it may be deployed in a gallery installation setting. A large number (perhaps 10- 20) of the devices are layed out on a table. Visitors to the gallery have the opportunity of picking up the devices and pressing the button. If they do so, they are responsible for destroying the device. The second way to deploy this piece is to simply hand out the devices to people in a public setting, such as a gallery opening, a performance, or any other public event. Finally, the devices can be used as tools of intervention in meetings or other public venues that visitors may wish to be disrupted. Multiple devices could be placed throughout the venue, and their buttons pushed, requiring security to find and dispose of the devices for the meeting to continue.