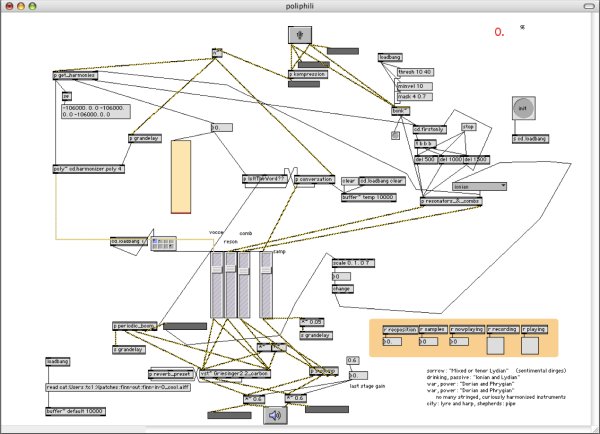 Poliphili, based on conceptual material derived from the Hypnerotomachia Poliphili, an incunabulum, is an audio installation realized in MaxMSP for microphones and speakers.

When someone makes sound into the room microphone, it immediately comes back echoing and pitch shifted to the current key and mode. The unprocessed signal is also recorded, and played back at a later time.

Ethereal, dreamlike syntehsis is triggered by sharp sounds in the room, making a near constant background web of sound in a particular basic mode. Over the course of approximately two hours, the key shifts through each of the 7 basic modes.

After each sustained loud sound comes into the mic (loud enough to trigger storage of a sample) a different sample from the storage plays back. The intent is twofold - first, a sort of "conversation", and second, events from much earlier in the evening get played back at unexpected times. This of course makes for wonderful coincidences when the earlier conversation matches the current topics. The intended venue for performance is a cocktail party.

Performed first at a fantastic party of Finn which set the bar for all tomorrows'.